ASEA Power Systems was named winner of the 2019 IBI Export Excellence Award this morning at the International Boatbuilders’ Exhibition and Conference (IBEX.) The award was presented by IBI editorial director Ed Slack in a presentation this morning at the Industry Breakfast that traditionally raises the curtain on the IBEX Conference.

“ASEA Power Systems could have written the playbook when it comes to developing a successful export strategy. Identifying the problem of ageing marina infrastructure around European islands, this manufacturer of power conversion equipment, spotted an opportunity. With electrical needs onboard ever increasing, and microgrids struggling to cope, ASEA took to developing specific new products to spearhead its growth into new markets.” 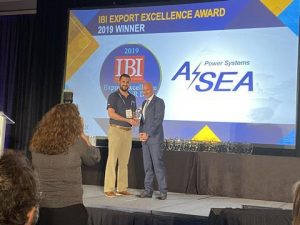 The judges were impressed with ASEA’s 360-degree approach that testifies to the fact that growing exports is not just about building distributor networks, but about developing a thorough understanding of individual market needs.

The power conversion company is successfully tapping into market demand among boaters in Europe and Asia traveling between countries with differing electrical systems and voltage demands.

“The ASEA concept is for owners to be able to take their boat and plug it in anywhere,” explained sales manager for the Americas, Joseph McCartney, who accepted the award for ASEA this morning. McCartney said the firm will be further expanding its global service network to ensure support for boaters in the most remote locations.

As well as receiving a crystal award to display on its stands, ASEA Power Systems’ prize also includes an advertising package worth in excess of US$10,000 in IBI magazine.

The IBI Export Excellence Award is now in its second year and was conceived to recognize US businesses that have a long-term strategy and shown unrivaled commitment, both financially and on the ground, to growing their international business.